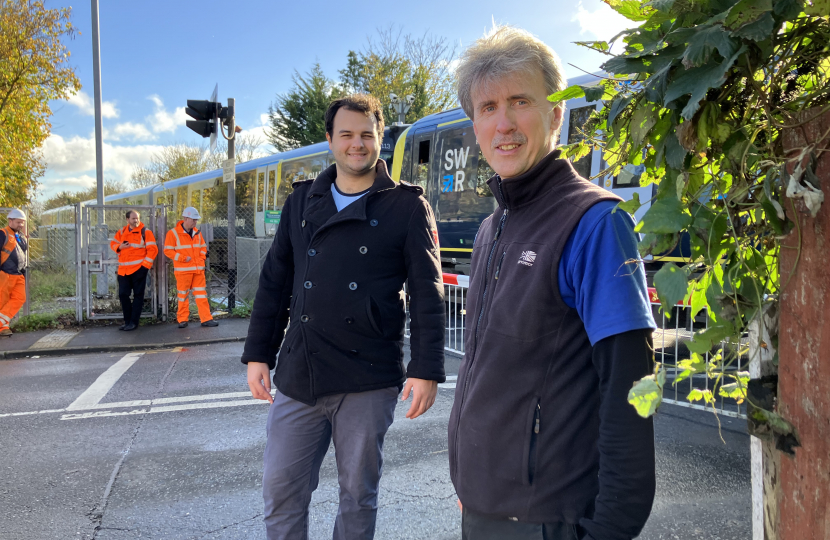 Egham Hythe Conservative candidate Mark Adams has met with the Network Rail's level crossings manager recently to discuss the issue of barrier downtime, which impacts all our residents.

Mark also asked Runnymede Council leader Cllr Tom Gracey to write to the Level Crossings Team to request a feasibility study for replacing the crossings with tunnels and bridges.

In his letter, Cllr Gracey wrote: "The recent inspections of the level crossings indicate they have a G2 rating indicating the level of danger to those that use them.  Both crossings have 226 trains per day according to the Network rail website. With longer waiting times users of the crossings are prepared to take more risks and ignore warning lights in order to cross.

"That being the case I would like to request on behalf of the residents of Runnymede that Network Rail undertake a feasibility study to see what opportunities there are to close one or both of these crossings with road traffic and pedestrians making use of a tunnel or bridge."

Mark Adams explained: "When the railway line was originally built the line crossed an area of farmland and at the time it was not deemed necessary to provide bridges or tunnels to cross this area. In the decades since, the area has changed dramatically with housing estates, schools, shops and business centres. We have also seen the growth of the car as the transport of choice for communities."

Network Rail conceded that ‘if the railway was built from scratch today then level crossings would not feature,’ and has promised signalling changes which should start to ease waiting times from August 2023.

Mark, who is pictured with Egham Conservative councillor Alex Balkan, will continue to campaign on this important quality of life issue.

Dr Ben Spencer MP is calling for greater oversight and co-ordination of flood response matters, after residents were left for 6 days with continued sewage flooding.