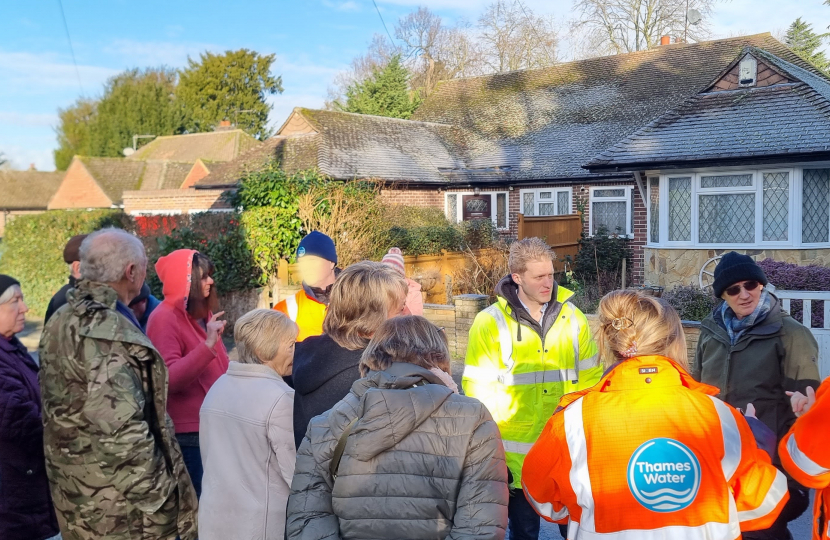 Dr Ben Spencer MP is calling for greater oversight and co-ordination of flood response matters, after residents were left for 6 days with continued sewage flooding.

Following rising water levels, water contaminated with sewage began affecting some properties in Thorpe last weekend, causing damage and distress to residents. This was reported to Thames Water and residents also contacted Dr Ben Spencer, their local MP, who has been campaigning for more action to tackle flooding, including sewage flooding.

Despite contact with Thames Water and Affinity Water from both residents and Dr Ben Spencer, by Thursday the issue remained unresolved. Correspondence showed that was in part due to lack of clarity of the cause of the issue, and therefore who was responsible for resolving the matter.

In response, the MP arranged for Thames Water to visit the site this morning to meet with residents and see first hand the impact the flooding, and lack of action to resolve it, was having. Thames Water representatives agreed with Ben Spencer’s assertion that there needed to be immediate remedial works, and Thames Water has now agreed to begin works to resolve the issue.

It is simply unacceptable that residents had to wait 6 days before action was taken to address this. Every time delays occur due to lack of ownership of the issue, residents are the ones who suffer the consequences.

Thames Water should have a duty to respond and determine the cause of any issue to prevent such delays. I am also calling for Runnymede and Weybridge to have access to a local flood control centre so responses to incidents such as this can be co-ordinated, and residents can have a single point of contact to report and receive updates on local flooding issues.

The flooding also created a hazard on local roads and pathways, creating dangerous conditions in the current freezing temperatures for cars and pedestrians, including children attending the local school.

Revisiting the site on Thursday afternoon, Dr Ben Spencer was pleased work appears to have now begun, however will be monitoring progress to ensure this is fixed as soon as possible. He will continue to call for a stronger framework to protect local homes and businesses so that residents do not have to experience such delays in future.

Join our fight against anti-social behaviour

Your Local Conservative team led by Mark Adams and Cllr Alex Balkan, work closely with our MP, Dr Ben Spencer, to tackle issues affecting our community in Egham Hythe and to represent you at the council and parliament.