Derek has served as Councillor for Chertsey Meads Ward , (more recently Chertsey Riverside) for the past 14 years, conscientiously representing the community since his retirement from a successful lifelong career in television drama production; including 18 years on the BAFTA award winning police series “The Bill”

During his term in office, Derek has served on all the major committees which together contribute to the successful running of the Council’s business.  His service to the Borough also includes the honour of having served as Mayor of Runnymede in 2015/16, over the period of the 800th anniversary of Magna Carta.

Acknowledged for his “hands-on” approach and deep concern for his residents, Derek has gained a reputation for “sorting” local issues.  In the bigger arena, he is a prominent member of the Council Working Parties and Committees, steadfastly engaged in ensuring the best for Runnymede and all its residents.

An able, confident and hard working Councillor, whose heart is with those he serves, Derek is also a Trustee of the two leading Chertsey charities (dedicated to assisting the needy of the town) and a past President of the Chertsey Rotary Club.  A married man with a gang of grandchildren, his eyes are focussed on continuing the job in hand – supporting the people of Chertsey - and overseeing the improvement of our town and Borough, for the benefit of all its citizens, but most particularly as a legacy for the next generation. 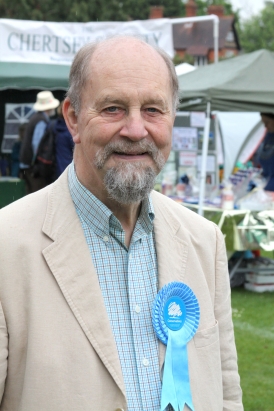